Stitch it up all you want, it ain’t gonna work………

Understanding the historical perspective on dirty politics and how patterns relate to each other across different asset classes at the moment may help us understand what’s likely next for both Brexit and the markets. If you think Brexit doesn’t matter, well think twice because I think Brexit and the way it is solved will have political, economic and financial implications for the entire globe for many years to come. The choices are globalists win, Brexit gets derailed in which case we have short-term euphoria before long-term collapse; vs nation state democracy wins, Brexit gets implemented properly and the UK serves as a model for other countries in Europe in which case we’ll go through short to mid-term shocks but a much better long-term ending. Here we go….

In 1945 my native Romania got swept by the red-tumor called communism and fell under the influence of the Soviet Union following the termination of WWII. Churchill and Roosevelt decided to trade influence in Romania for influence in Greece where the US and the UK had massive economic and geo-strategic interests. The Romanian people were known to be opposed to Russian influence in their country – largely based on the hostilities in WWI and the dishonest treatment we got after supporting the Ruskies to win the Turkish-Russian war of 1875-1877 that would have otherwise been lost without Romania’s help. The Romanian people kept hoping a miracle would happen and the Americans and the British would come to our rescue. Realistically, there was no premise for that because the previous Romanian governments had behaved in a rather idiotic way and had nationalized American and British property in the country in the mid-to-late 1930ies; so from a pragmatic point of view there was absolutely no reason why the Americans and the British would have the appetite to prolong a bloody war that had claimed at that point over 50 million lives globally to confront the Soviets over Romania. But the interesting thing is this. Despite the Soviets imposing things on us, they had to redo the elections multiple times until they could bully and steal enough votes to proclaim the Communist party the winner in a landslide. We Romanians have NEVER EVER voted communist but the elections were redone 3 times until the Soviets got the result they wanted. What a total shame!

Fast forward 74 years later and take a look at the Brexit situation. The British people have clearly made a choice for self-determination and voted their country out of the EU. Despite the popular vote, which clearly is the biggest democratic exercise in the history of the United Kingdom, the establishment is trying to block the exit. It has been proposed that Brexit supporters are racist, mentally ill, did not understand what they were doing and voting for and so on. Bollocks mate, people came out voting against the single market, against the customs union and against the ECJ European Courts of justice jurisdiction on June 23rd 2016 and they knew exactly what the vote meant. Yet, the establishment has decided the EU is Europe’s sole way forward towards peace and prosperity despite the fact that their so-called union has brought in the past two decades nothing but low growth, economic misery in the Mediterranean, social and political conflict and violence in the form of social protests or terrorism. The Brexit parallel with the 1945s Romania is easy to see:

It is thus easy to see at this point why Brexit will dominate British, indeed Global politics, for a very long time to come – I speculate AT LEAST a decade. When the EU disintegration process will accelerate in the months and years to come – which it surely will thanks to the lack of economic sustainability of the current European project – those that disregarded the result of the British referendum will absorb the full anger of the British people – and rightfully so. The electorate took a life boat out of a modern-day titanic and offered a way out but the politicians will have chosen to keep everybody on the sinking vessel so they can enjoy personal privilege one more hour, one more day, one more week. It is easy to state that the fact that the UK is still a member of the EU after the 29th of march, 2019 deadline, almost 3 years after the British voters decided they would be again a self-governing nation, is probably one of the biggest disgraces in the history of the Western Civilization and a Bolshevik-like hi-jack of the democratic tradition in the very country that invented representative Government. I do not condone violent behavior and I do certainly not wish for it to happen because innocent lives will be lost and many will get hurt, but in the face of such robbery I am afraid the biggest risk is that the whole affair descends into violence at some point. Whatever these treasonous career politicians will attempt, the masks are off by now and public revolt is simply a matter of time.

From a market’s standpoint it is rather interesting. This Brexit stitch-up gives us bond weakness, metals / gold stocks weakness and major indices strength. Like the fundamentals behind the moves the moves themselves are likely to be phony and short-lived; the potential for something unpleasant remains there. I may sound like a communist myself repeating the same thing every week but the reality is the mid and long-term configuration remains rather difficult. Whatever strength there is, it must be played against tight short-term risk levels and understood as a short-term development.

The near-term count in the S&P is somewhat ambiguous. The best you can do is be bullish or bearish biased depending on whether we trade above levels of support or below levels of resistance and just do basic fibo projections from any reactions highs and lows. Do keep in mind that the risk of getting hammered increases with every 1% we get closer to the September highs.

As usual, if you have specific questions about any patterns, feel free to reach out and I can give you more specific short-term counts and levels for anything you’re interested in. As a big picture view here are some charts for SPX, GBPUSD, Gold stocks and Gold futures, respectively. 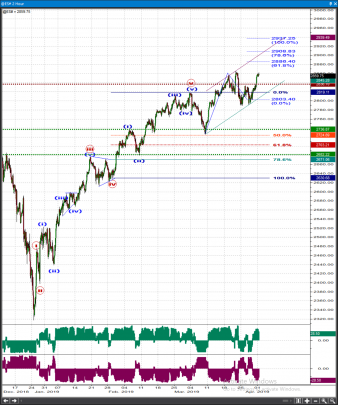 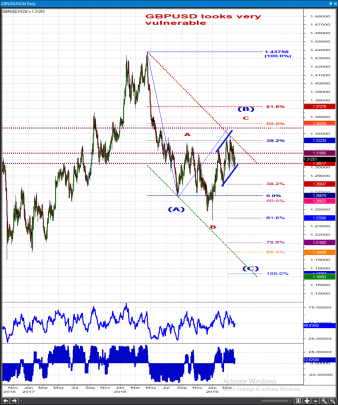 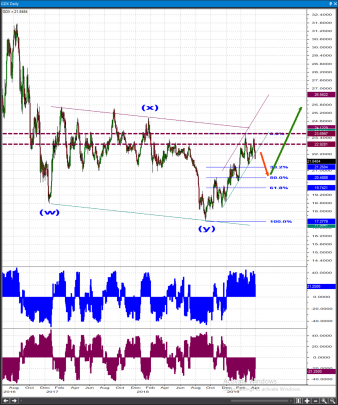 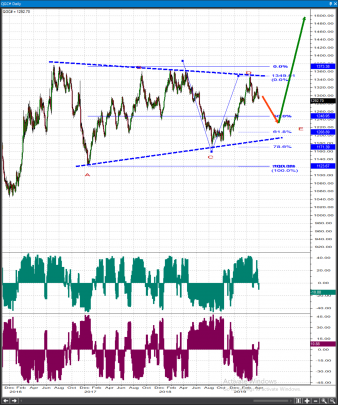 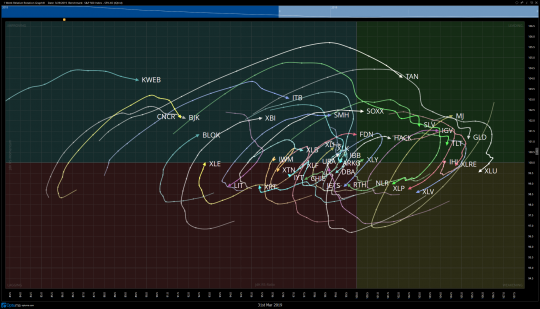 UFS is a not so boring paper company that has had a monster 2019 thus far. Most recently it has undergone a very orderly and systematic pull back that should serve as a great spot to enter for a move back toward the yearly highs. Just below current price we have support in the form of 1 year volume point of control, as well as an initiative bullish candle post gap up from February 5th. It is a paper company but still has a beta over 1.5 so this one has the potential to hit a target fairly quickly. 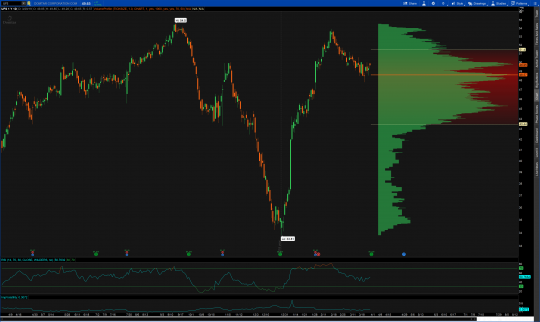 I try not to overlap blog topics with weekly premium service letter picks but I want to make sure this is not overlooked. The BJK ETF is one that covers the gaming sector fairly well. Technically we are looking for a breakout here as a probable inverse head and shoulder pattern is at play. Couple this with the stellar seasonality exhibited by the resorts and casinos in the month of April and we have all the makings for a move higher in the coming month. Stocks or options are fine here, but if using options give yourself some extra time. 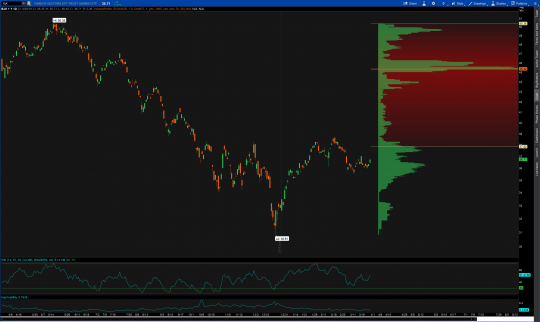 GH is a fairly recent IPO that has had a great start to 2019. The stock gapped higher after its most recent earnings announcement on heavy relative volume. We can use this breakout area which coincides well with the 38.2% Fibonacci Retracement from the most recent swing low to high as support. I like it back to ATHs within the next two option expiries. 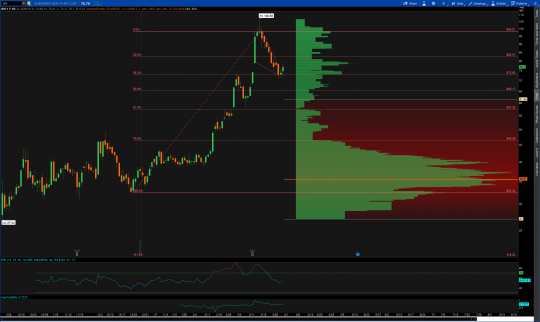 GOOGL continues to hold the primary trend for 2019. Recently it has pulled back to the 1 year Value Area High leaving lower shadows near the trend line. Three bullish initiative candles put in in early March should also serve well as support. Make sure you understand your risk involved with trading options before entering GOOGL. Weeklies are generally the play so entries must be surgical and it’s best treated as a futures trade. 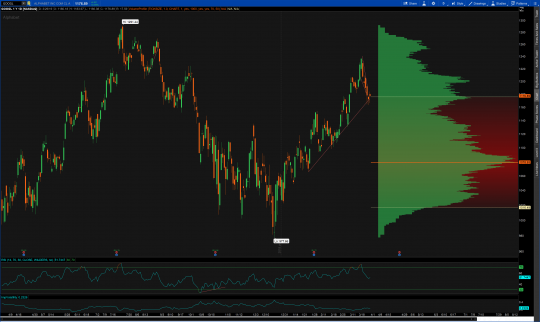 A favorite long setup of mine is when a stock slowly and methodically sells off back into levels where a gap up on earnings took place. In those trades we count on the support provided by institutional buyers or buyers with deep pockets. On the flipside, when heavy selling occurs after earnings, gapping a stock lower we have a setup that is equally attractive. We can see that PDD is trading higher but should run into a wall of resistance shortly. It is highly unlikely that the stock continues higher without being sold off at least one or two more times at levels where overhead supply sits. I like this as a short early this week. 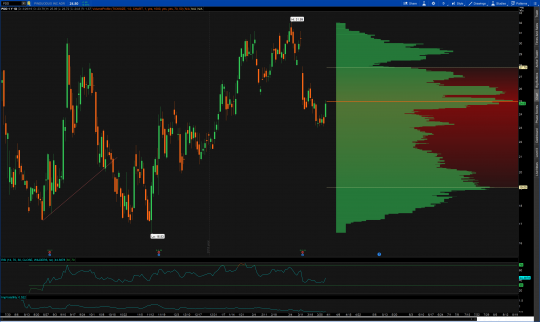