The Bears Have My Attention

When a historically significant signal of a looming recession flashes, it is our job to pay attention. The signal I am speaking about is of course the inversion of the yield curve. In normal circumstances when you lend someone your money, you would expect that the longer you lend it to them, the more interest you would get paid. When a short term loan begins to yield more than a long term loan, it’s widely regarded as a bad sign for the economy. It’s a loss of confidence in the future.

Inversions of the yield curve happen for a couple of reasons. When investors see trouble on the horizon they begin selling their stocks and shifting that money into bonds. Bond prices and yields on those bonds are inversely correlated. Meaning, when investors plow into bonds driving the price up, the yield on those bonds fall. Another reason is due to actions of the Federal Reserve. The market seems to be saying that the Fed has kept its benchmark short-term rate too high (yeah I know) and that it should further cut rates because the economy is showing signs of slowing.

Why do we care about any of this as investors? I’ll tell you why. Because every inversion of the 2-year and 10-year note has preceded a recession since 1956. The last of course being in December 2005 which preceded the Great Recession and 2008 financial crisis. An inversion was also present before the dot com tech bubble burst in 2001. Here is a table from Urban Carmel at The Fat Pitch Blog showing what the inversions have signaled for both recessions and the stock market:

In the past 50 years the 2-10 yield curve inversion has occurred an average of 19 months before the next recession and 12 months before the final peak in the $SPX. This is why we care. Although there are some major differences in the current environment. The first being rates have never been this low when the curve has inverted. In addition, $15 trillion worth of foreign bonds paying negative interest have most definitely distorted the yield curve and its inversion implications.

I’m already bored with talking about this so I will cut to the chase. As I write this, we are receiving strong data points stateside. Walmart posted better than expected earnings and boosted their outlook. The economic productivity last quarter was on the rise. Even Alibaba (China) posted solid earnings despite all the warnings signals of China slowing. I have friends and other acquaintances  that don’t follow markets texting me saying, “Did you hear there is a yield curve that is broken and we are heading into a recession and your stocks are all going to be worthless?”

Yeah, thanks I know the curve “broke.” The point is, it’s not just different this time, it’s different every time. Because we had an intraday flash of a recession signal doesn’t mean you panic sell anything. It simply means you take notice. If you know anything about markets you understand that it tends to always fool the majority. It is the master magician, an expert at humbling the masses who think they know what is in store. As of yesterday, the search terms “Recession” “stock market crash” and “inverted yield curve” were trending on Google Trends. The whole world is waiting for the “crash.” This is evidenced also by the latest BAML survey of Global Fund Managers and their highly defensive allocation: 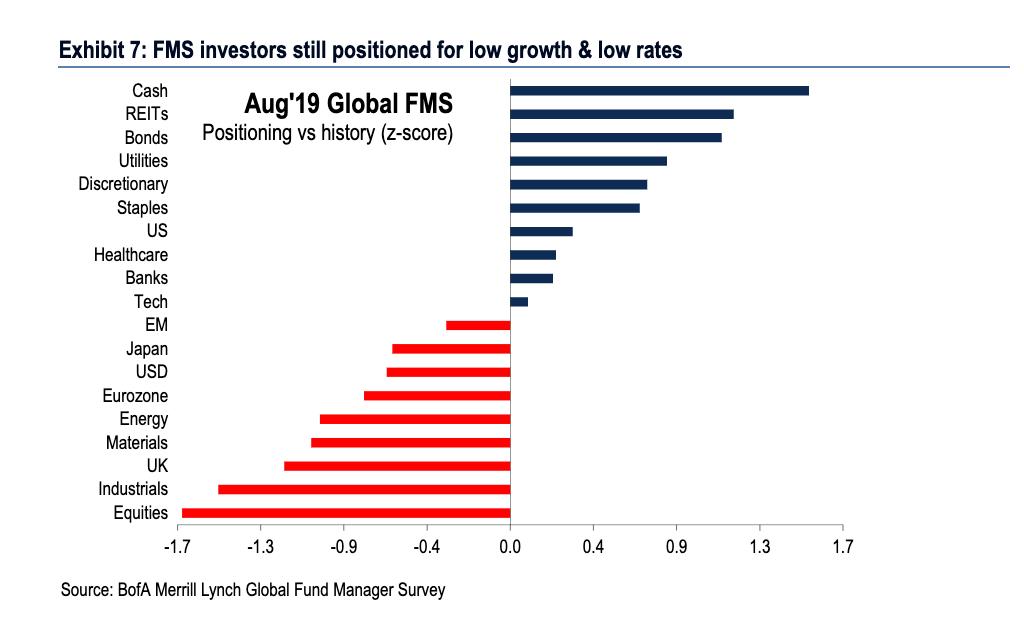 So, while we take notice of all that is going on from tariffs to inversions to global economic slowdown we keep in mind that Mr. Market has an uncanny ability to make a fool out of the masses. Bad news has a way of working itself out. Short term losses have a way of turning into longer term gains. The bears have my attention, but they don’t have my stocks.