Look For The Helpers

“When I was a boy and I would see scary things in the news, my mother would say to me, “Look for the helpers. You will always find people who are helping.” – Fred Rogers

The nature of the media today is to use the most intimidating headlines possible, click-bait some may say, to trigger readers. The financial media does a great job of this, especially during times of increased market volatility. If you are a long term investor, 99% of the news flow is less than worthless. If you are a short term trader, it matters because it can affect your short term futures and options positions. The past few sessions in the market we have seen a significant uptick in volatility. Increasingly, these market pullbacks set off a domino effect of waterfall style selling. When stocks fall in news driven environments you can expect an increase in speed and an uptick in correlation. It is at these times where we can take the advice once given by Mr. Rogers and look for the helpers.

What are the helpers? I’m glad you asked. The helpers are the technical and quantitative tools we have at our disposal to limit our downside risk. They are the helpers because they are unbiased. They aren’t rigged news headlines designed to get you to act out of emotion, they aren’t opinion, and they aren’t gut feel. They are defined and factual tools that help you to know where to reconsider a position. Let’s take a look at some them using very real world scenarios, ie the positions I am in: 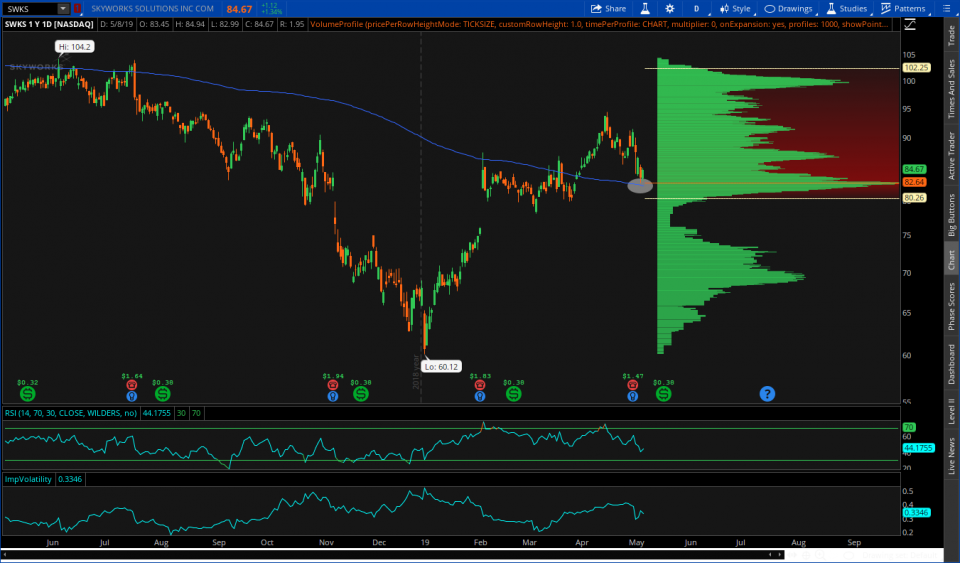 I am long June calls in SWKS. I even added to this position making it over sized. See the helpers? Just below current price you have a long term 200 day moving average, a yearly volume point of control, and not too far below that the value area low on a year’s worth of daily volume. No matter the scary headlines, I know where I exit this trade. 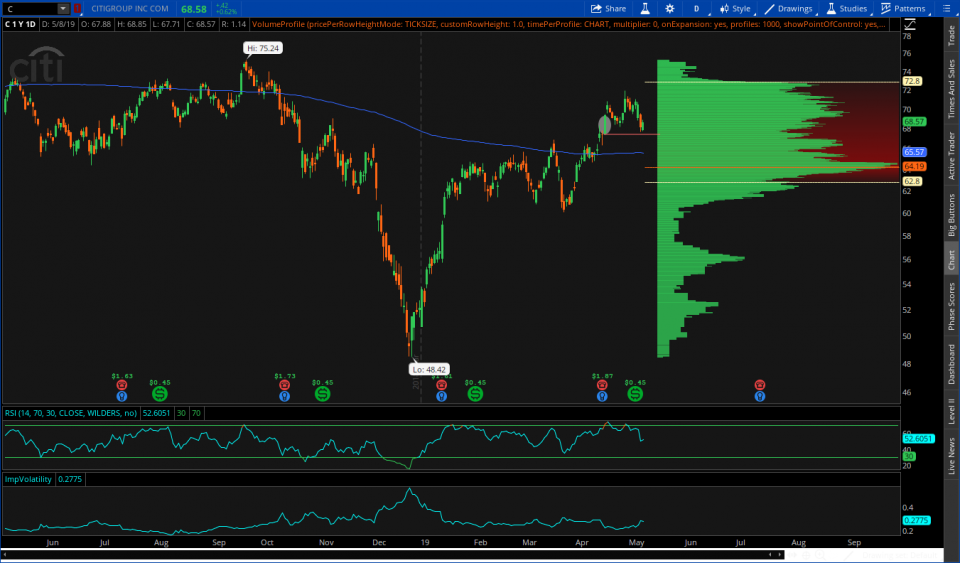 Will the Fed raise rates? Lower rates? Will the China tariffs impact banks? I’m quite certain I don’t know. What I do know is that I am in C at a spot that I like the upside and I have help on the downside. Overall, this looks Inverse Head and Shoulder – ish, Price is supported by an initiative bullish candle which price is respecting right now. Help is in place in the form of defined risk. I know what I stand to lose and it’s an amount I can live with.

CY is my newest position, just added this morning. Tariffs will surely impact the semiconductor space right? I don’t know, maybe. But I have a position to manage and I can’t sit around spitballing until I find out. CY looks like it’s in an impulse wave sequence higher at first glance. Help is given in the form of a very strong bullish candle on heavy volume, we know that these often act as support. It is also wedging into the 20 day moving average as we speak. This in my eyes is a good spot to take a shot long as I like the risk/reward profile.

This gives you an idea of the difference between having a plan versus when rumors run your life. All those years ago, Mr. Rogers said you would always find helpers when you saw scary things in the news. These are just a few examples of helpers I look to when encountering choppy waters in the markets.