Has The Market Bottomed?

It seems maniacal to ask such a question in the face of an unprecedented economic slowdown due to a novel virus that has turned our worlds upside down. But as we continue to adjust to this hopefully temporary new world, our global markets hum along, drifting lower and propelling higher as they digest new information daily. The question “has the market bottomed” is running through every fund manager and market participant’s mind as they make decisions on how to allocate capital. In the past several weeks anyone involved has experienced a range of emotion likely spanning from pure nausea to “why the fu*k would I consider buying anything?” Record numbers of jobs being lost, increasing number of deaths from the Coronavirus, a potential housing crisis on the horizon, and earnings season just around the corner for companies pulling their guidance in increasing numbers. We are on lock down, we can’t go anywhere or do anything, and we should consider buying stocks?

Yes, we should consider buying stocks. In the past several weeks I would have hesitated to suggest that anyone else do the same, provided that  your time horizon wasn’t years into the future. Unless you were a seasoned tactical trader, armed with a skill set most do not possess, there was no reason to buy.  After today, I would be more comfortable telling someone that they could begin dipping into strong companies (with proper risk management of course) for the nearer term. Why?

My increased confidence in a potential sustainable rally comes thanks to William O’Neil and company’s nearly 140 years of research on market cycles. Going back to 1880, the Investor’s Business Daily team has found that no new bull market (tough to even type that) has ever started without a follow through day.This special day type has to occur in one of the major market indexes and is significant in alerting us that a new sustainable rally has begun. How to spot a follow through day: 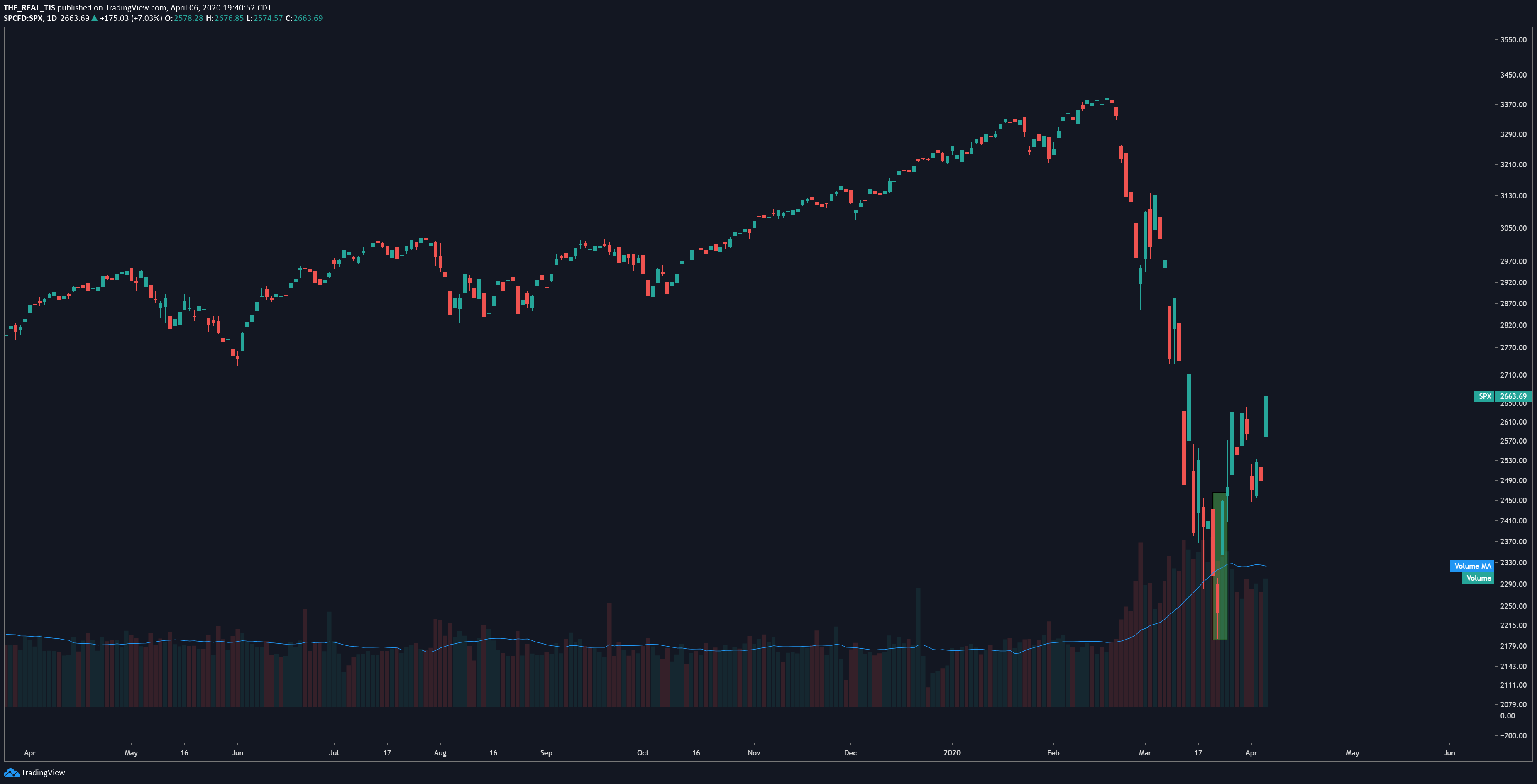 Back on March 23rd and 24th we had our reversal and attempted rally which initially got our attention. March 23rd we made a new low, reversing and closing higher the following day. While you could put some capital to work here, IBD would caution against jumping back into the market too soon. A one day reversal while encouraging has the propensity to catch you offside, only to reverse and continue lower. March 24th in the SPX was day one in our attempted rally. 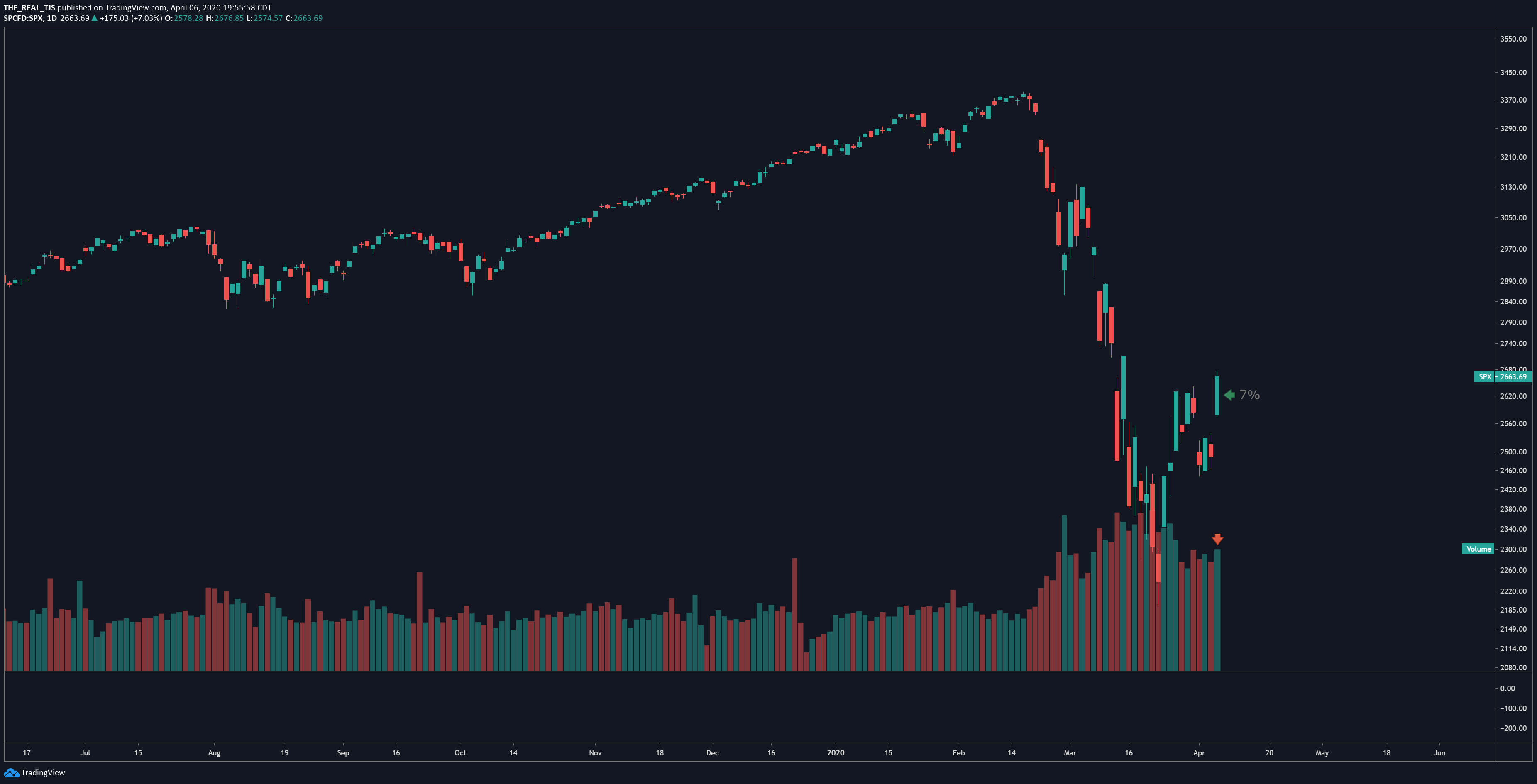 The 7% move higher today certainly qualified in terms of price movement, and secondly the move came on volume that eclipsed that of the previous session. Today was a follow through day by definition and those who are aware of this research done by William O’Neil and company know it. I should mention that O’Neil found that follow through days which came too soon (within 3 days of the initial low) often failed. He preferred a true follow through day to come at minimum 4 sessions after the reversal day.

So we know from O’Neil’s research that a follow-through day indicates a rally attempt has succeeded, and the market direction has changed from a correction into a confirmed uptrend. But what does he suggest we do with capital now that a confirmed uptrend is in place? To start, it doesn’t mean you head out into the market tomorrow and begin buying anything and everything with reckless abandon. What it does do is give you a green light to put together a list of stocks with strong sales and earnings at price levels that make sound technical sense. My hope is that if reading this blog for any length of time you have an idea what that means.

To recap: Today was a powerful signal sent by the bulls that no matter how dire the world around us seems, the stock market may have a great deal of the bad news priced in. Stocks did lose over 30% of their value in record time after all. While a follow through day as defined by O’Neill and his team through over 100 years of research has preceded every new bull market, we must limit ourselves to getting back in gradually. Maybe there is a stock on your wish list that you plan over time to build a 5% position in. You might start with adding 1-2% of that on the next couple of sessions. We know that risk management is rule number one, two and three.

Keeping this in mind, in the new world we can celebrate the little wins.

Today was one of them.